Skip to content
Contents show
1 Electric Or Hybrid?
2 Features Of The BMW i8
3 Powertrain
4 iDrive System
5 Looks
6 What Next For The BMW i8?
7 In Conclusion

Known for producing high quality cars the i8 was much anticipated. But is the BMW i8 electric?

We take a look at the power behind the i8 and examine some of its main features including the powertrain and iDrive system.

BMW launched the i8 at the Frankfurt Motor Show in 2013, and it was released the following year. The i8 from BMW is a plug in hybrid electric car. But it’s not just any hybrid car, it is a hybrid sports car.

The 2021 i8 model has a single powertrain and a turbocharged 3-cylinder, 1.5 liter combustion engine combined with an 11.6-kWh battery pack situated at the rear axle.

This is coupled with two all-electric motors. All three power sources produce a total of 369 horsepower making the BMW i8 capable of accelerating from 0 to 60mph in 4.5 seconds.

It provides all-wheel drive performance and torque of 420 lb-ft.

With a six speed automatic transmission, it was the first model to be powered by this type of engine.

With regards to fuel economy, the i8 will give approximately 35 MPGe, or miles per gallon equivalent, and travel around 22 miles on electricity alone.

Features Of The BMW i8

There are many impressive features of the BMW i8 including the precise lines that add to and enhance the car’s aerodynamic capabilities.

The classic BMW kidney grilles on the front of the car have air vents to control the flow of air just enough to cool the system.

Additional vents on the front bumper channel air flow away from the front wheels to improve aerodynamics.

Meanwhile, vents in front of the rear wheels act as air intakes for the rear turbo charged 3-cylinder engine and redirect airflow as well as decreasing drag.

The design of the rear of the i8 ensures that the airflow maintains the necessary downforce to keep the car agile but planted firmly on the road at high speeds.

A lithium-ion battery that serves the front mounted electric motor is located in the center of the vehicle and creates a low center of gravity for added efficiency.

The powertrain in the BMW i8 combines power from an internal combustion engine with two electric motors and a lithium-ion battery.

This is what creates power and delivers it to the wheels to push the car forward.

Electric motors at the front wheels launch the car with 131 horsepower and 184 lb-ft of torque.

This is done through a two-stage automatic transmission. The motors get their energy from the lithium-ion battery located centrally in the car.

The battery also provides a boost to the combustion engine during acceleration. A combination of power from the electric motors and gasoline engine enables the all-wheel drive performance of the BMW i8.

Additionally, a hybrid car such as the i8 can operate solely on electric power if that is needed. The i8 has a range of 22 miles on purely electric power with a top speed of 75 miles per hour. 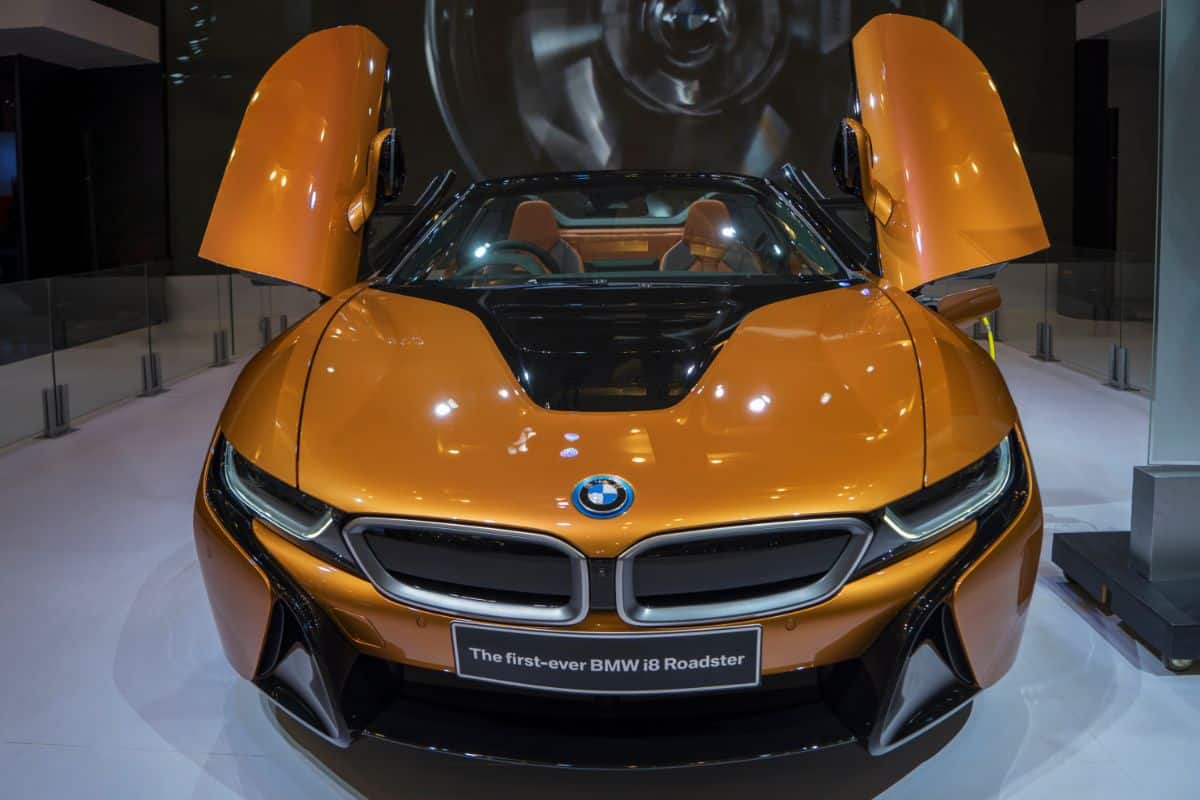 BMW’s iDrive system is the intuitive nerve center of the car and allows the driver to have control over the range of menus. These range from selecting driving modes, to climate control settings and the navigation system.

With safety in mind and with acknowledgment of its sports car inspiration the central console of the i8 is angled slightly to the left making access for the driver much easier.

All the functions that the driver will need such as the start/stop button, gear shift lever, and the parking brake are all within easy reach. The system is ergonomically designed with tactile controls and an 8.8″ touchscreen display.

3D high resolution displays give relevant information and instructions directly to the dashboard simply and clearly.

The iDrive system is efficient and comfortable while also managing to be sporty. All designed to give you confidence and control.

The car has been carefully designed to produce an aerodynamically efficient and high performance vehicle.

It also manages to look beautiful with its long wheelbase and precise lines. The sweeping silhouette gives the illusion of movement even when the car is still.

Scissor doors look impressive and sporty but also serve an important purpose. They are specially designed from aluminum and carbon fiber. This keeps the weight down and adds to the overall efficiency of the i8.

Internally the car is sporty but offers luxury and comfort. The interior is a combination of renewable and premium materials including soft, vegetable tanned leather.

Both driver and passenger seats are located close to the ground for improved comfort even at speed or around the tightest of corners.

There is no denying that this is a very good looking car so not only is it better for the environment but dismisses the idea that hybrid cars are boring and ugly.

What Next For The BMW i8?

In March 2020 BMW announced that it was discontinuing the production of the i8.

Up to that point they had sold more than 20,000 units. The company said that it had fulfilled its function of paving the way for sustainable but dynamic driving.

For now, the i8 is enjoying its status as a ‘classic car’ and as the forerunner of BMW’s list of hybrid plug-in cars that it has since added to its collection. In its time the i8 became the most successful sports car with an electrified drive system.

One of the best sports hybrid cars, the BMW i8 is dynamic and sustainable and has created a standard to which other hybrid sports cars will be held.

In performance and appearance, it has dismissed the notion of hybrid cars being sluggish and unappealing.

The i8 has inspired BMWs collection of hybrid cars in its 3, 5, and 7 series as well as the X3 and X5. While never a fully electric car it may one day materialize as such under a new name.

Jonathan Rice
Jonathan Rice is a writer with a degree in Applied Physics (UCL, 1998) who suffers from an obsession with green technologies and sustainable mobility.

He made this website to help answer people’s questions about new technologies, green vehicles, and as the title suggests, really anything to do with zero emission vehicles.